The rink is the heart of the community in most prairie towns.

That’s especially true in Balcarres where the arena complex is home to a thriving minor hockey system, a dance club and a mixed martial arts studio.

“I have a sign in my house that says, ‘If we’re not home, we’re at the rink,’ ” said Balcarres resident Curtis Geisler, whose community turned Cameco Hockey Day in Saskatchewan into a week-long celebration leading up to the official festivities Jan. 19-21.

When the buzzer sounded on the 12-game event, the host organizing committee announced a profit of $67,295 to help cover renovations to their 51-year-old facility. Cameco Hockey Day in Saskatchewan travels to a different community each year to help raise funds for the local arena. The event is a partnership between Cameco, the Saskatchewan Hockey Association (SHA) and the host community.

Balcarres succeeded on the strength of local volunteers and sponsors from throughout the region, said Craig Geisler, head of the local organizing committee.

“It wasn’t just the rink board and minor hockey that did this,” he noted. “Everyone in the community has stepped up to do this for the youth in Balcarres and it’s been a huge success.” 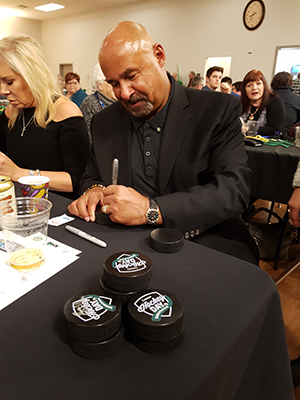 “The rink is definitely the hub for Balcarres in the wintertime,” added Craig Geisler. “With all of the youth groups that use it, I couldn’t imagine if we didn’t have the rink here. There’d probably be no youth in the community and if you don’t have youth in your community, you’re definitely not going to succeed.”

Cameco and the SHA spent eight months working closely with the organizing committee. On-site volunteers in Balcarres included Cameco CEO Tim Gitzel who made himself at home behind the grill.

“I was back there flipping burgers and it was a lot of fun,” he said. “Whether it’s working in the kitchen or cleaning the ice, people here stepped up. That’s what Saskatchewan volunteering is all about.”