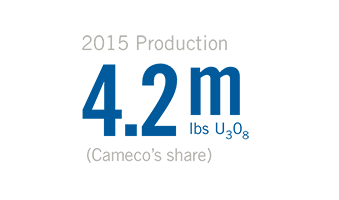 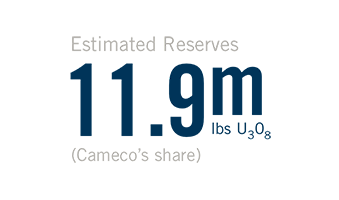 The Rabbit Lake operation, which opened in 1975, is the longest operating uranium production facility in North America, and the second largest uranium mill in the world.

Production this year was unchanged from our 2014 production as a result of planned timing of production stopes, coupled with slightly improved ore grades.

Development and production continued at the Eagle Point mine. At the mill, we continued to improve the efficiency of the mill operation schedule.

On December 17, 2015, we announced that underground mining activities at Eagle Point were being restricted due to a rock fall in an inactive area of the mine. As a precautionary measure, non-essential personnel were removed from the mine while the condition of the affected area was evaluated. Mine production was suspended, although milling of previously mined and transported ore continued through to year end.

During the fourth quarter of 2015, we recognized a $210 million impairment charge related to our Rabbit Lake operation. The impairment was due to increased uncertainty around future production sources for the Rabbit Lake mill as a result of the ongoing economic conditions. The amount of the charge was determined as the excess of carrying value over the recoverable amount. The recoverable amount of the mill was determined to be $69 million.

We expect to produce 3.6 million pounds in 2016. The decrease compared to 2015 is the result of the restriction of mining activities at the end of 2015, which extended into 2016.

Under our current licence, we expect to have sufficient tailings capacity to support milling of Eagle Point ore until about late 2017, based upon expected ore tonnage, milling rates and tailings properties.

Our plan for fully utilizing the available tailings capacity of the Rabbit Lake In-Pit Tailings Management facility requires regulatory approval in 2016 for which we have submitted the required applications. With these regulatory approvals and after we complete the necessary work on the existing pit, we expect to then have sufficient tailings capacity to support milling of Eagle Point ore until at least 2021 based upon expected ore tonnage, milling rates, and tailings properties.

We plan to continue our underground drilling reserve replacement program in areas of interest north and northeast of the current mine workings in 2016. The drilling will be carried out from underground locations.

As part of our multi-year site-wide reclamation plan, we spent over $0.7 million in 2015 to reclaim facilities that are no longer in use and plan to spend over $0.5 million in 2016.