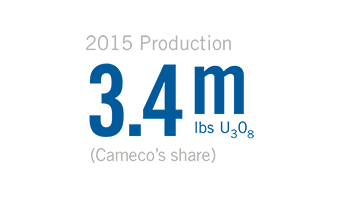 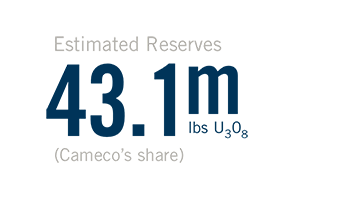 Inkai is a very significant uranium deposit, located in Kazakhstan. There are two production areas (blocks 1 and 2) and an exploration area (block 3). The operator is joint venture Inkai limited liability partnership, which we jointly own (60%) with Kazatomprom (40%).

Inkai is one of our three material uranium properties.

As of December 31, 2015, Inkai had fully repaid the outstanding loan under our agreement to fund its project development costs related to blocks 1 and 2. In 2015, Inkai paid the remaining $0.8 million (US) in interest on the loan and repaid $55 million (US) of principal.

We are currently advancing funds for Inkai’s work on block 3 and, as of December 31, 2015, the principal amounted to $148 million (US). Under the loan agreement, Inkai is to repay Cameco from the net sales proceeds from the sale of production from block 3.

In 2012, we entered into a binding memorandum of agreement (2012 MOA) with our joint venture partner, Kazatomprom, setting out a framework to:

Kazatomprom is pursuing a strategic objective to develop uranium processing capacity in Kazakhstan to complement its leading uranium mining operations. Their primary focus is now on uranium refining, which is an intermediate step in the uranium conversion process. A Nuclear Co-operation Agreement between Canada and Kazakhstan is in place, providing the international framework necessary for applying to the two governments for the required licences and permits. We expect to pursue further expansion of production at Inkai at a pace measured to market opportunities. Discussions continue with Kazatomprom.

In 2015, Inkai completed construction of the test leach facility and began pilot production from test wellfields, as well as advancing work on a preliminary appraisal of the mineral potential of block 3 according to Kazakhstan standards.

In 2016, Inkai expects to continue with pilot production from the test leach facility and to continue working on a final appraisal of the mineral potential according to Kazakhstan standards.

The block 3 test leach facility is now operational and state commissioning of the test wellfields was accomplished during 2015. Our application for an extension of the block 3 evaluation period is still pending final approval from the Ministry of Energy of the Republic of Kazakhstan. Inkai continues working on the final appraisal of the mineral potential of block 3 according to Kazakhstan standards. Although a number of extensions of the licence term have been granted by Kazakh regulatory authorities in the past, there is no assurance that a further extension will be granted. Without such extension, there is a risk we could lose our rights to block 3, and a risk we will not be compensated for the funds we advanced to Inkai to fund block 3 activities.

Kazakhstan declared itself independent in 1991 after the dissolution of the Soviet Union. Our Inkai investment and plans to increase production are subject to the risks associated with doing business in developing countries, which have significant potential for social, economic, political, legal and fiscal instability. Kazakh laws and regulations are complex and still developing and their application can be difficult to predict. To maintain and increase Inkai production, we need ongoing support, agreement and co-operation from our partner and the government.

The principal legislation governing subsoil exploration and mining activity in Kazakhstan is the Subsoil Use Law dated June 24, 2010, as amended (new subsoil law). It replaces the Law on the Subsoil and Subsoil Use, dated January 27, 1996.

In general, Inkai’s licences are governed by the version of the subsoil law that was in effect when the licences were issued in April 1999, and new legislation applies to Inkai only if it does not worsen Inkai’s position. Changes to legislation related to national security, among other criteria, however, are exempt from the stabilization clause in the resource use contract. The Kazakh government interprets the national security exemption broadly.

With the new subsoil law, the government continues to weaken its stabilization guarantee. The government is broadly applying the national security exception to encompass security over strategic national resources.

The resource use contract contains significantly broader stabilization provisions than the new subsoil law, and these contract provisions currently apply to us.

To date, the new subsoil law has not had a significant impact on Inkai. We continue to assess the impact. See our annual information form for an overview of this change in law.