We remain confident in the long-term fundamentals of the nuclear industry, despite the near- to medium-term uncertainty. World population and industrial development continue to grow, and the World Energy Outlook for 2011 predicts a near doubling of electricity consumption between 2009 and 2035. Most of this energy will be used by developing (non-OECD) countries as their populations and standards of living increase.

Within this context, most countries are pursuing a diversified approach to energy growth, with an emphasis on energy security and clean energy. Nuclear power can generate baseload electricity with no toxic air pollutants, carbon dioxide (CO2) or other greenhouse gas emissions. It has the capacity to produce enough electricity on a global scale to meet the world's growing needs, and while it is not the only solution, it is an affordable and sustainable source of safe, clean and reliable energy. As a result, we expect nuclear energy to remain an important part of the energy mix.

This is evident in the growth in reactor construction we expect over the next 10 years. There are 431 reactors operable today. We expect the start up of 96 net new reactors by 2021, increasing the total number of operable reactors to 527.

This is a rate of growth in new reactor construction not seen since the 1970s.

In the UK, government commitment to nuclear energy is strong, driven by concerns about energy security and the need to limit CO2 emissions. The US continues to make progress toward new nuclear development with six units planned, four of which we expect will receive construction licences this year, and one of which is already under construction.

We have long-term supply contracts in many of these countries, including the US and China.

Other previously non-nuclear countries are either moving ahead with their reactor construction programs or considering adding nuclear to their energy programs in the future. For example, the United Arab Emirates is proceeding with its plans to have 5.6 gigawatts of nuclear capacity in place by 2020 and is beginning the process to secure fuel for those reactors. In Saudi Arabia, where power demand has been increasing by 7% to 8% annually, plans to build 16 reactors by 2030 have been announced. Vietnam, Poland, Lithuania, Turkey, Jordan, Egypt and Belarus are also moving forward with plans to proceed with nuclear power development. 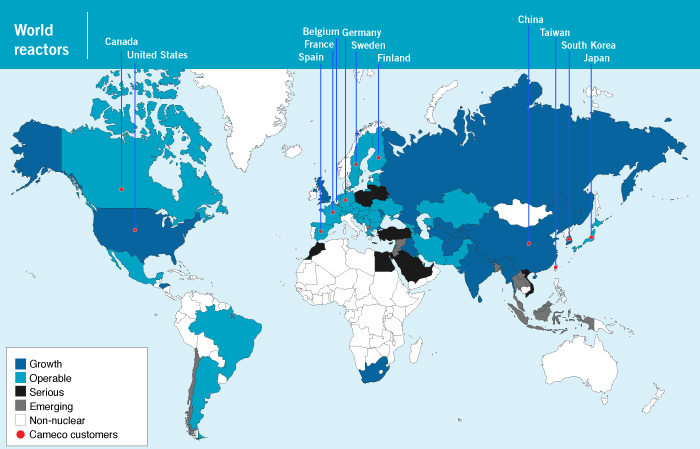 Demand for uranium is growing

Not surprisingly, as the number of reactors grows, so too does the demand for uranium.

We expect world demand of approximately 2.2 billion pounds over the next 10 years, which includes both world consumption and strategic inventory building. Although our previous forecast has decreased by about 7% due to the events in 2011, it is still significant growth. By 2021, we expect world uranium demand to be about 250 million pounds per year, an average annual growth rate of about 3%.

Supply is expected to tighten

While the impact of the March events in Japan on demand was more immediately apparent, the drop in uranium prices and ongoing global economic turmoil are beginning to have an impact on the outlook for supply.

Disruptions in mine production, difficulty raising funds for new mining projects, project delays, the announced cancellations of new mines or mine expansions, and the end of the Russian highly enriched uranium (HEU) commercial agreement, all point to tightening supply.

We expect 65% of global uranium supply over the next 10 years to come from existing primary production—mines that are currently in commercial operation—while we expect 15% to come from existing secondary supply sources. However, most secondary sources are finite and will not meet long-term needs. Currently, one of the largest sources of secondary supply is uranium derived from the Russian HEU commercial agreement. We expect all deliveries from this source to be made by the end of 2013, leaving a gap of about 24 million pounds per year. See Managing our supply and costs for more information about the Russian HEU commercial agreement.

The result is that we expect 20% of supply will need to come from new sources at a time when new projects are being delayed or cancelled because of current market conditions. In addition, there are barriers to entry, and the lead time for new uranium production can be as long as 10 years or more, depending on the deposit type and location.

Given our extensive base of mineral reserves and resources, diversified sources of supply and global exploration program, we are well positioned to meet the growing demand for uranium.