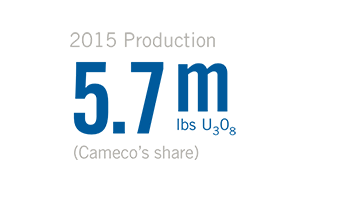 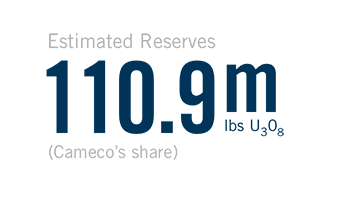 Cigar Lake is the world’s highest grade uranium mine, with grades that are 100 times the world average. We are a 50% owner and the mine operator.

Cigar Lake is one of our three material uranium properties.

We began developing the Cigar Lake underground mine in 2005, but development was delayed due to water inflows. In October 2014, the McClean Lake mill produced first uranium concentrate from ore mined at the Cigar Lake operation. Commercial production was declared in May 2015.

The sandstone that overlays the deposit and basement rocks is water-bearing, with large volumes of water under significant pressure. To prevent water from entering the mine, help stabilize weak rock formations, and meet our production schedule, the ore zone and surrounding ground in the area to be mined must meet specific ground freezing requirements before we begin jet boring.

During construction, development and remediation of the underground infrastructure, we employed a hybrid ground freezing approach using a combination of underground and surface freezing. The costs related to each technique are similar; however, there are significant advantages to freezing the ground from the surface. With surface freezing, less mine development is required, which results in less waste rock and greater ground stability, since freeze tunnels are not required between production tunnels. In addition, congestion is reduced and underground development for freeze infrastructure is no longer a critical path mine activity. Based on these advantages, we have elected to proceed exclusively using surface freezing to mine current reserves at Cigar Lake. 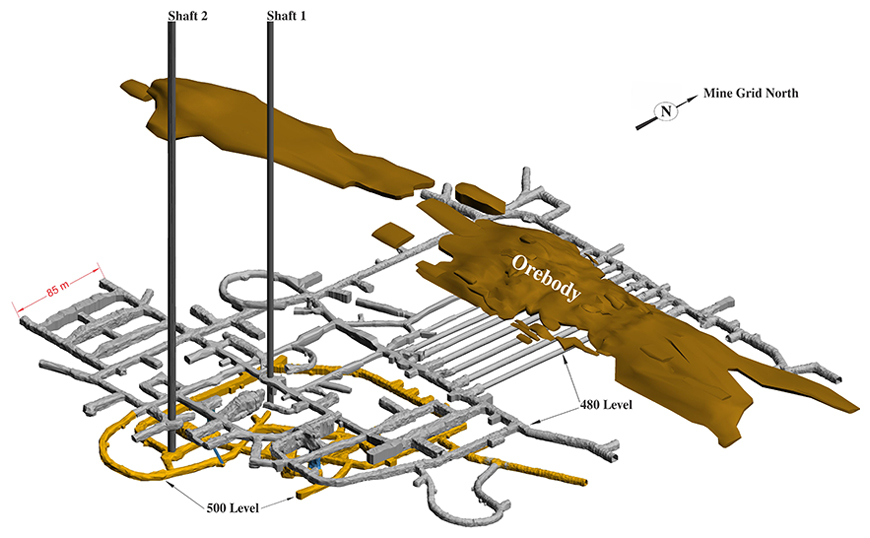 After many years of test mining, we selected jet boring, a non-entry mining method, which we have developed and adapted specifically for this deposit. This method involves:

We have divided the orebody into production panels and at least three production panels need to be frozen at one time to achieve the full annual production rate of 18 million pounds. One JBS machine will be located in each frozen panel and the three JBS machines required are currently in operation. Due to limitations on the availability of high pressure water, two machines can be actively mining at any given time while the third is moving, setting up, or undergoing maintenance. Later in the mine plan, we may require a fourth JBS machine to sustain annual production of 18 million pounds.

The Cigar Lake joint venture is paying the capital costs for the modification and expansion.

Total packaged production from Cigar Lake was 11.3 million pounds U3O8; our share was 5.7 million pounds. The operation exceeded our forecast of 10 million pounds (100% basis) as a result of higher productivity and our intention to adjust annual production as necessary, based on our operating experience during rampup.

During the year, we:

Commercial production signals a transition in the accounting treatment for costs incurred at the mine. Cigar Lake met all of the criteria for commercial production, including cycle time and process specifications, in the second quarter of 2015. Therefore, effective May 1, 2015, we began charging all production costs, including depreciation, to inventory and subsequently recognizing them in cost of sales as the product is sold.

As a result of our decision to exclusively use surface freezing going forward, and the resulting change in the mine plan, the bulk of the development and freeze drilling required for mining in 2016 is already complete. We are continuing to plan for future expansion of surface freezing infrastructure in late 2016.

Additional estimated expenditures of $50 million (100% basis, our share $25 million) are expected to be required at the McClean Lake mill in 2016, primarily to complete upgrades in the tailings neutralization area in support of the continued rampup to full production of 18 million pounds per year.

We are planning to conduct delineation drilling from surface to confirm and upgrade resources contained in the western portion of the deposit. Approximately 65,000 metres of diamond drilling is planned over a three-year period, starting in 2016, in order to complete a detailed geological and geotechnical interpretation, a resource estimate, and a technical study for the western portion of the deposit.

Cigar Lake is a challenging deposit to develop and mine. These challenges include control of groundwater, weak rock formations, radiation protection, water inflow, regulatory approvals, surface and underground fires and other mining-related challenges. To reduce this risk, we are applying our operational experience and the lessons we have learned about water inflows at McArthur River and Cigar Lake.

Limited mining experience of the deposit

Although we have now successfully mined a number of cavities, these may not be representative of the deposit as a whole. As we ramp up production, there may be some technical challenges, which could affect our production plans, including, but not limited to, variable or unanticipated ground conditions, ground movement and cave-ins, water inflows and variable dilution, recovery values, and mining productivity. There is a risk that the ramp up to full production may take longer than planned and that the full production rate may not be achieved on a sustained and consistent basis. We are confident we will be able to solve challenges that may arise, but failure to do so would have a significant impact on our business.

To manage our risks and meet our production schedule, the areas being mined must meet specific ground freezing requirements before we begin jet boring. We have identified greater variation of the freeze rates of different geological formations encountered in the mine, based on new information obtained through surface freeze drilling. As a mitigation measure, we have increased the site freeze capacity to facilitate the extraction of ore cavities as planned.

There is a risk to our plan to achieve the full production rate of 18 million pounds per year in 2017 if AREVA is unable to complete and commission the required mill modification and expansion on schedule. We are working closely with AREVA to understand and help mitigate the risks to ensure that mine and mill production schedules are aligned.

The current collective agreement between AREVA and unionized employees at the McClean Lake operation expires in May 2016. There is risk to our 2016 and 2017 production outlook for Cigar Lake if AREVA is unable to reach an agreement and there is a labour dispute.

The consequences of another water inflow at Cigar Lake would depend on its magnitude, location and timing, but could include a significant delay or disruption in Cigar Lake production, a material increase in costs or a loss of mineral reserves.

We believe we have sufficient pumping, water treatment and surface storage capacity to handle the estimated maximum inflow.