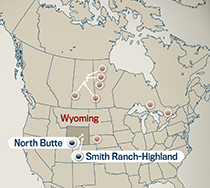 We operate Smith Ranch and Highland as a combined operation. Each has its own processing facility, but the Smith Ranch central plant currently processes all the uranium, including uranium from satellite facilities. The Highland plant is currently idle. Together, they form the largest uranium production facility in the United States.

Production this year was 6% higher than our forecast and significantly higher than 2012 production, with new mine units contributing to production at Smith Ranch-Highland in 2013, as well as the startup of the North Butte satellite.