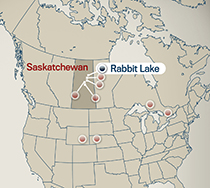 The Rabbit Lake operation, which opened in 1975, is the longest operating uranium production facility in North America, and the second largest uranium mill in the world.

Production this year was 8% higher than 2012 production as a result of improved efficiency of the mill operating schedule.

Development and production continued at Eagle Point mine. At the mill, we continued to improve performance by replacing key pieces of mill infrastructure and improving the efficiency of the mill operation schedule. The mill ran continuously for eight months and maintenance work was completed during an extended shutdown period of four months.

In 2011, we received regulatory approval to begin exploration-related development and drilling on a new zone (Powell Zone) located about 650 metres northeast of the existing mine workings. In 2013, we continued to make progress on the related development work.

We extended our underground drilling reserve replacement program into 2013, testing beneath existing zones as well as to the east and northeast of the current mine workings (including Powell Zone). See Mineral reserves and resources for more information.

We expect to have sufficient tailings capacity to support milling of Eagle Point ore until about 2018 (based upon expected ore tonnage and milling rates).

In 2014, we are continuing to evaluate options to expand the existing tailings management facility to support mining of existing reserves at Eagle Point, and provide additional tailings capacity to process ore from other potential sources. Depending upon the chosen option, we may need an environmental assessment and regulatory approval to proceed with any increase in capacity.

We plan to continue our underground drilling reserve replacement program in areas of interest east and northeast of the mine in 2014, both at depth and along the strike of the Collins Bay fault. The drilling will be carried out from underground locations.

As part of our multi-year site-wide reclamation plan, we spent over $1.2 million in 2013 to reclaim facilities that are no longer in use and plan to spend over $0.5 million in 2014.