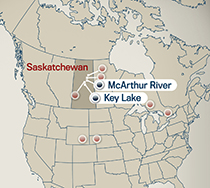 McArthur River is the world’s largest, high-grade uranium mine, and Key Lake is the largest uranium mill in the world.

Ore grades at the McArthur River mine are 100 times the world average, which means it can produce more than 18 million pounds per year by mining only 150 to 200 tonnes of ore per day. We are the operator.

McArthur River is one of our three material uranium properties.

We use a number of innovative methods to mine the McArthur River deposit:

The sandstone that overlays the deposit and basement rocks is water-bearing, with large volumes of water under significant pressure. We use ground freezing to form an impermeable wall around the area being mined. This prevents water from entering the mine, and helps stabilize weak rock formations. To date, we have installed five freezewalls and are currently preparing a sixth.

Raisebore mining is an innovative non-entry approach that we adapted to meet the unique challenges at McArthur River. It involves:

We have used the raisebore mining method to successfully extract about 250 million pounds (100% basis) since we began mining in 1999. Raisebore mining is scheduled to remain the primary extraction method over the life of mine. 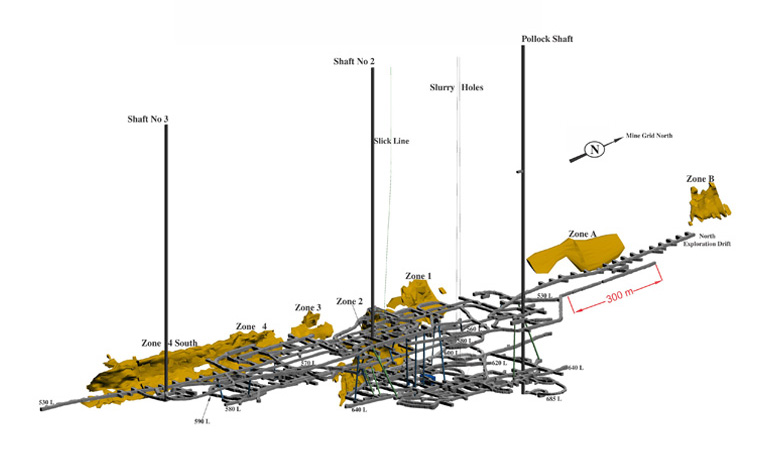 Zone 2 has been actively mined since production began. It is divided into four panels (panels 1, 2, 3 and 5) based on the configuration of the freezewall around the ore. As the freezewall is expanded, the inner connecting freezewalls are decommissioned in order to recover the uranium that was inaccessible around the active freeze pipes. Panel 5 represents the upper portion of zone 2, overlying part of the other panels. Mining is nearing completion in panels 1, 2 and 3, and the majority of the remaining zone 2 proven mineral reserves are in panel 5.

Zone 4 is divided into three mining areas: central, north and south. We are actively mining the central area. A new mining area is also under development – zone 4 north – and is forecast to be in production in 2014.

Boxhole boring is similar to the raisebore method, but the drilling machine is located below the mineralization, so development is not required above the mineralization. This method is currently being used at a few mines around the world, but had not been used for uranium mining prior to testing at McArthur River.

We expect boxhole boring will only be used as a secondary method, in areas where we determine raiseboring is not feasible or practical. Test mining to date has identified this as a viable mining option; however, only a minor amount of ore is scheduled to be extracted using this method.

Blasthole stoping involves establishing drill access above the mineralization and extraction access below the mineralization. The area between the upper and lower access levels (the stope) is then drilled off and blasted. The broken rock is collected on the lower level and removed by line-of-sight remote-controlled scoop trams, then transported to a grinding circuit. Once a stope is mined out, it is backfilled with concrete to maintain ground stability and allow the next stope in sequence to be mined. This mining method has been used extensively in the mining industry, including uranium mining.

Blasthole stoping is planned in areas where blast holes can be accurately drilled and small stable stopes excavated without jeopardizing the freezewall integrity. We expect this method to complement the raiseboring method and to allow for more economic recovery of ore on the periphery of the orebody, as well as smaller, lower grade areas.

We carry out initial processing of the extracted ore at McArthur River:

Water from this process, including water from underground operations, is treated on the surface. Any excess treated water is released into the environment.

At McArthur River and Key Lake, we realized benefits under the production flexibility provision in our operating licences (see Flexibility provisions). Ongoing efforts to improve the efficiency and reliability of the Key Lake mill resulted in record mill performance.

As long as average annual production does not exceed 18.7 million pounds per year, production flexibility provisions in the licence conditions handbooks allow:

Our average annual production at McArthur River/Key Lake over the past five years is 19.7 million pounds. Consequently, we have limited flex capacity remaining under our licence provisions.

In addition, we will continue the work to further increase our annual production rate to 22 million pounds (100% basis) by 2018, subject to regulatory approval, as contemplated in the revision to our mine plan in 2012.

In order to implement the planned production increases, we must continue to successfully transition into new mine areas through mine development and investment in support infrastructure. In addition, we plan to:

We completed installation of the freezewall and brine lines in the upper mining area of zone 4 north. We began freezing the ground in the third quarter of 2013, with plans to start mining the zone in late 2014.

In addition to the underground work, we continued to upgrade our electrical infrastructure on surface to address the future need for increased ventilation and freeze capacity associated with mining new zones and increasing mine production.

The Key Lake mill began operating in 1983 and is currently licensed to produce 18.7 million pounds (100% basis) per year. Mill production at Key Lake is expected to closely follow McArthur River production, subject to receipt of regulatory approval. As part of our Key Lake extension environmental assessment (EA), we are seeking approval to increase Key Lake’s nominal annual production rate to 25 million pounds and to increase our tailings capacity; in 2014, we expect the federal and provincial EA to conclude and expect a decision to be made on these increases.

The mill revitalization plan includes upgrading circuits with new technology to simplify operations and improve environmental performance. Major components of a new calciner circuit were installed in 2013 and commissioning is expected to be completed in 2014. As part of the revitalization plan, we also replaced the existing electrical substation in order to meet future electrical demands.

In 2013, our surface exploration programs continued to test zones of mineralization north of the current mining areas.

We plan to produce 18.7 million pounds per year (13.1 million pounds our share) until we receive the required regulatory approvals and complete the work necessary to increase production at both McArthur River and Key Lake.

Zone 4 north is the next area to be mined. Freezing has begun and we forecast initial production to start in 2014.

We expect to use raisebore mining in this area, applying the ground freezing experience we gained in zone 2, panel 5. This should significantly improve production efficiencies compared to boxhole boring.

In 2014, we expect to complete the regulatory process required to increase production to 25 million pounds per year at Key Lake. We will also seek approval to deposit tailings in the Deilmann tailings management facility to a higher level, providing enough tailings capacity to potentially mill all the known McArthur River mineral reserves and resources, should they be converted to reserves, with additional capacity to toll mill ore from other regional deposits.

In 2014, we plan to continue advancing the underground exploration drifts to the southwest and northeast directions. Additional drilling is planned underground to delineate zone A, and from surface to identify additional mineral resources in the deposit.

The current collective agreement with unionized employees at the McArthur River and Key Lake operations expired on December 31, 2013 and bargaining for a new agreement is currently underway. There is risk to production in 2014 if we are unable to reach an agreement and employees go on strike.

In order to successfully achieve the planned production schedule, we must continue to successfully transition into new mining areas, which includes mine development and investment in critical support infrastructure.

The zone 4 north transition planned in late 2014 carries a slightly higher transition risk than other mining area transitions due to the site’s limited flexibility to offset a shortfall in production due to schedule delays.

Tailings from processing McArthur River ore are deposited in the Deilmann tailings management facility. At current production rates, the facility will reach licensed capacity by 2018. A significant delay in obtaining or a failure to receive, the necessary regulatory approval for the expansion of the facility could interrupt or prevent the operation of McArthur River/ Key Lake as planned.

In the past, sloughing of material from the pitwalls has resulted in loss of capacity. Technical studies show that stabilizing and reducing water levels in the pit enhances the stability of the pitwalls and reduces the risk of sloughing. In 2009, regulators approved our plan for the long-term stabilization of the Deilmann tailings management facility pitwalls. We implemented the plan and completed the project in 2013. We are proceeding with the environmental assessment to support an application for regulatory approval to deposit tailings to a higher level. This would provide enough tailings capacity to mill all the known McArthur River mineral reserves and resources, should they be converted to reserves, with additional capacity to toll mill ore from other regional deposits.

The consequences of another water inflow at McArthur River would depend on its magnitude, location and timing, but could include a significant interruption or reduction in production, a material increase in costs or a loss of mineral reserves.

We believe we have sufficient pumping, water treatment and surface storage capacity to handle the estimated maximum sustained inflow.