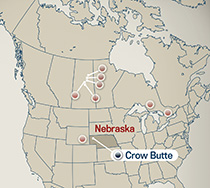 Crow Butte was discovered in 1980 and began production in 1991. It is the first uranium mine in Nebraska, and is a significant contributor to the economy of northwest Nebraska.

Production this year was as forecast, but slighter lower than 2012 production.

The regulators continued to review our applications to expand and re-license Crow Butte. We are allowed to continue with all previously approved activities during the licence renewal process.