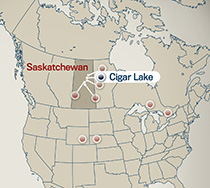 Cigar Lake is the world’s second largest high-grade uranium deposit, with grades that are 100 times the world average. We are a 50% owner and the mine operator.

Cigar Lake, which is being developed and scheduled to begin production this year, is one of our three material uranium properties. 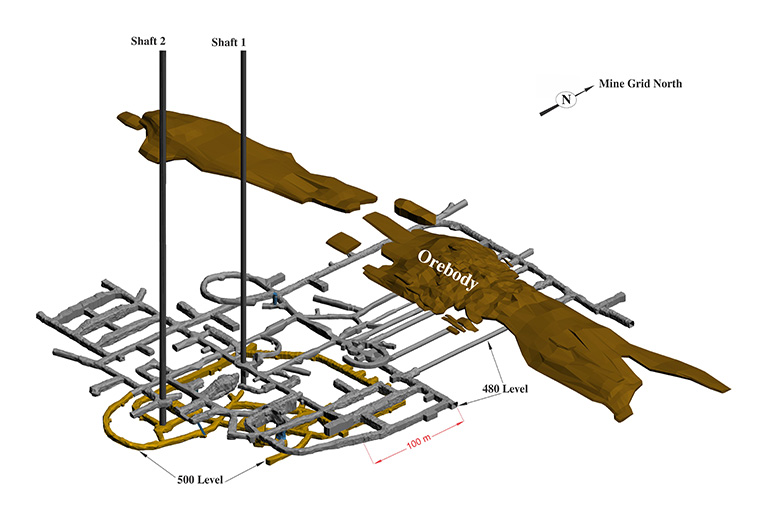 We will use a number of innovative methods and techniques to mine the Cigar Lake deposit:

The sandstone that overlays the deposit and basement rocks is water-bearing, with large volumes of water under significant pressure. We will freeze the ore zone and surrounding ground in the area to be mined to prevent water from entering the mine and to help stabilize weak rock formations.

Our plan is to use a hybrid freezing approach. We will use surface freezing to support the rampup period and underground freezing for the longer term development of the mine. Through 2013, we continued to drill freezeholes from surface, expand the surface freezing infrastructure and put the new freezeholes in operation. To manage our risks and meet our production schedule, the area being mined must meet specific ground freezing requirements before we begin jet boring.

After many years of test mining, we selected jet boring, a non-entry mining method, which we have developed and adapted specifically for this deposit. Overall, our initial test program was a success and met all initial objectives. This method involves:

In September 2013, we announced that we had identified additional underground work that would delay jet boring in ore. After the work was completed, we jetted the first ore cavity in December 2013, and expect to begin ore production from the mine during the first quarter of 2014.

During the year, we:

In August 2013, we announced that our share of the total capital cost for Cigar Lake was expected to increase between 15% and 25% as a result of scope changes, increased costs at the mine and mill, and the inclusion of some capital costs that will be incurred subsequent to the mining of the first ore that were not included in our previous estimate. Our total share of the capital cost for this project is now estimated to be about $1.3 billion (previously $1.1 billion) since we began development in 2005. In order to bring Cigar Lake into production in 2014, we estimate our share of capital expenditures will be about $130 million, including $100 million on modifications to the McClean Lake mill. Additional expenditures of about $35 million will be required at McClean Lake mill in 2015 in order to continue ramping up to full production. Our share of standby charges until production is achieved this year is estimated to be about $15 million.

The CNSC granted a uranium mining licence authorizing construction and operation of the Cigar Lake project. The licence term is from July 1, 2013 to June 30, 2021.

We expect Cigar Lake to produce between 2 million and 3 million packaged pounds from the mill (100% basis) in 2014. Based upon our commissioning and rampup experience, we will adjust our plans as necessary to allow us to reach our full production rate of 18 million pounds (100% basis) by 2018.

Given the scale of this project and the challenging nature of the geology and mining method, we have made significant progress. We will continue to develop this asset in a safe and deliberate manner to ensure we realize the economic benefits of this project.

Our expectations and plans regarding Cigar Lake, including our expected share of 2014 production, achievement of the full production rate of 18 million pounds by 2018, and capital costs, are forward-looking information. They are based on the assumptions and subject to the material risks discussed here, and specifically on these assumptions and risks:

Cigar Lake is a challenging deposit to develop and mine. These challenges include control of groundwater, weak rock formations, radiation protection, water inflow, mining method uncertainty, regulatory approvals, tailings capacity, surface and underground fires and other mining-related challenges. To reduce this risk, we are applying our operational experience and the lessons we have learned about water inflows at McArthur River and Cigar Lake.

There is a risk to Cigar Lake’s rampup schedule if the McClean Lake mill does not begin processing ore from the Cigar Lake mine by the end of the second quarter, 2014. There is also a risk to our plan to achieve the full production rate of 18 million pounds per year by 2018 if AREVA is unable to complete and commission the required mill upgrades on schedule. We are working closely with AREVA to understand and help mitigate the risks to ensure that mine and mill production schedules are aligned.

To manage our risks and meet our production schedule, the areas being mined must meet specific ground freezing requirements before we begin jet boring. We have identified greater variation of the freeze rates of different geological formations encountered in the mine, based on new information obtained through surface freeze drilling. As a mitigation measure, we have increased the site freeze capacity to facilitate the extraction of ore cavities as planned.

Although we have successfully tested the jet boring mining method in waste rock and began commissioning the system in ore, this method has not been proven at full production. As we ramp up production, there may be some technical challenges that could affect our production plans, including, but not limited to, variable or unanticipated ground conditions, ground movement and cave-ins, water inflows and variable dilution, recovery values and mining productivity. There is a risk that the rampup to full production may take longer than planned and that the full production rate may not be achieved on a sustained and consistent basis. A comprehensive commissioning and startup plan is underway with the objective to assure successful startup and on-going operations. We are confident we will be able to solve challenges that may arise, but failure to do so would have a significant impact on our business.

Our mining plan requires four jet boring system units. We currently have two units on site and a third unit has been ordered and manufactured. We have an agreement with a supplier to supply one additional jet boring system unit. There is a risk that rampup to full production at Cigar Lake may take longer than planned if the manufacture or delivery of the fourth unit does not take place as scheduled. As part of our startup plan, we are working with our supplier to assure timely delivery of the fourth unit.

The consequences of another water inflow at Cigar Lake would depend on its magnitude, location and timing, but could include a significant delay in Cigar Lake’s development or production, a material increase in costs or a loss of mineral reserves.

We believe we have sufficient pumping, water treatment and surface storage capacity to handle the estimated maximum inflow.