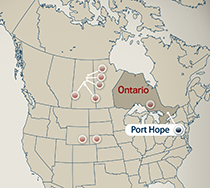 Port Hope is the only uranium conversion facility in Canada and a supplier of UO2 for Canadian-made CANDU reactors.

SFL is the newest conversion facility in the world. We contract almost all of its capacity through a toll-processing agreement to 2016.

Fuel services produced 14.9 million kgU, slightly higher than our plan at the beginning of the year and 5% higher than 2012 when we reduced production in response to weak market conditions.

In July, unionized employees at our Port Hope conversion facility accepted new three-year collective agreements, which include a 6% wage increase over the term of the agreements.

In December 2012, we received a positive decision on the environmental assessment for the project from Canada’s Environment Minister. In 2013, we began the licensing process with the CNSC, which is required to advance the project. The process will continue in 2014.

Based on the current weak market for UF6 conversion, we do not anticipate an extension of our toll conversion contract with SFL beyond 2016. If market conditions improve over the next few years, we would consider resuming our discussions to extend the contract.

We have decreased our production target for 2014 to between 13 million and 14 million kgU in response to weak market conditions.